The rapid expansion and transformation of the city in the late 1990s and early 2000s brought about a change in its character itself. The sleepy pensioner’s paradise was rudely woken up to concrete, cacophony and clutter. Those who experienced life in Bangalore during the  ‘golden’ years ruminate and rue about their loss. Of course, every generation considers their past years to be better than the present.

Stanley Carvalho is one such Bengalurean with fond memories of his childhood years spent in the Cantonment area of the city. Currently a Reuters journalist based out of the Middle East, he covers financial markets and activities.

Past and Curious is a collection of life in the not so fast and furious times of the city. The book is embellished by the colorful and whimsical illustrations by Paul Fernandez of Apaulogy fame.

The tales focus on areas in the erstwhile British areas of Cantonment such as Richards Town, Cooke Town, Coles Park and Ulsoor.  It rarely crosses the boundaries of MG Road, Brigade Road and surrounding areas, so it presents only one facet of the city. Even in this framework, the focus is on painting a picture of typical daily activities such as going to school, playing games, visiting the market, watching movies etc. Famous theaters and restaurants mentioned in the book should ring the nostalgic bell in people who were born after independence.

Eating out was not as common in the 60s and 70s as it is today. Money was scarce and restaurants were few and far between. A masala dosa/coffee or appam stew/tea or biryani or even ice cream treats once a month in the 60s was a big thing.

Excerpt from Past & Curious by Stanley Carvalho

The writing is light,  humorous and leaves the reader wistful at the end of it. This book will definitely appeal to a section of Bengalureans who would have gone through the same experiences as the author did. It is divided into two sections – the first consisting of newly written chapters and the second reprinted from his column for Deccan Herald – the city’s newspaper. However, there is some repetition between the two parts of the book  – some verbatim – like the one about Anglo Indians.

The flow is mostly random covering scattered topics that put together should give the reader a good picture of life in the yesteryears. The key underlining message is that everything was right and so much better in those years. But sometimes this borders the ludicrous, like the story about corporal punishment in schools during those years. There are many things we all look back and miss, but this is surely not one of them. “There were times when we enjoyed getting punished” reminisces the author and concludes by stating “One cannot help musing about how sensitive and fragile today’s children are and how they might have reacted if meted out the punishment of our days”. Really? This is surely misplaced nostalgia. Yes, the standards of teaching and quality of teachers may have gone down over years. But this is perhaps not one aspect of life that anyone would like to bring back to the present. 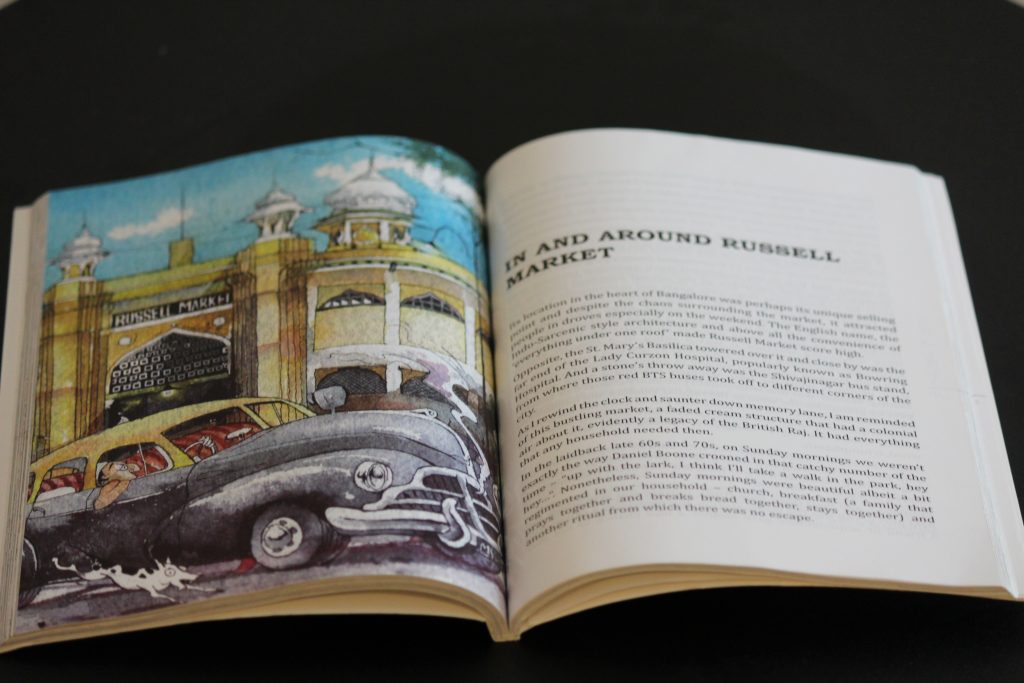 Cartoons by Paul Fernandez are spread through the book and complement the stories. It reminds one of how RK Laxman’s illustrations graced the famous stories of his brother RK Narayan.

One minor annoyance is that there are no page numbers printed on the first page of every story in the book. So the reader will have to thumb back and forward to see the exact location.

Despite its focus on one area of the city, if you grew up during its ‘green and clean’ years, it will definitely resonate with you.