The Green Heart of Bengaluru 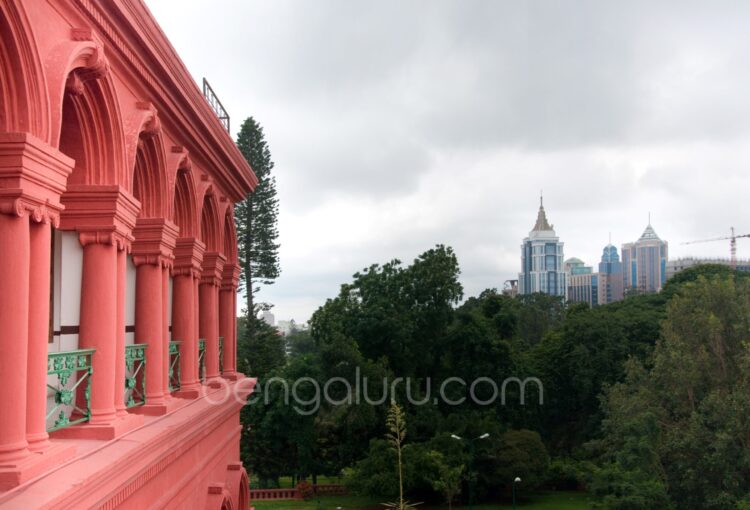 A view of Cubbon Park from Attara Kacheri

Text and Interview by Arvind Krishnaswamy

The birth of Cubbon Park was a fortuitous outcome of the undulating terrain and geographical imperfections around the newly constructed Attara Kacheri. The Attara Kacheri site was a narrow strip of land that rapidly sloped and had rocks and gravel pits. Trees were planted to cover these blemishes.1 Over the years, this open landscape was slowly transformed into the park as we see it today. Cubbon Park never had a defined boundary and grew and shrunk in area over time. In many ways, it was the ‘neglected child’ compared to the ‘pampered’ Lalbagh that was the creation of a sultan. Even the Mysore Government ranked it lower in status, calling it as “next in importance to Lalbagh”.2 Perhaps, the only occasion when Cubbon Park gave something to Lalbagh was in 1935, when the two stone lions from the Band Stand were moved to the front of the Glass House.3

The proximity of Cubbon Park to the corridors of power and justice has been a mixed blessing. The absence of walls made it more accessible as a people’s park but it also left it vulnerable to encroachment.

To experience the difference it makes when you feel choked by air pollution, just come from any part of the city into the park. Nature instantly turns on air conditioning and the temperature drops by a few degrees. Every breath of air feels much cleaner, healthier and you are in a completely different world.

Bengaluru is fortunate to have this urban oasis of 197 acres similar to Central Park in New York (840 acres) and Hyde Park in London (350 acres). Apart from obvious benefits such as reducing air pollution, lowering temperatures and offering an escape from city life, the park can play an important role in educating people about ecology and to move towards a more sustainable society. 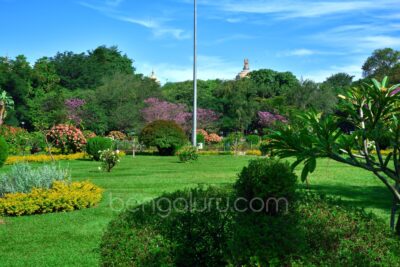 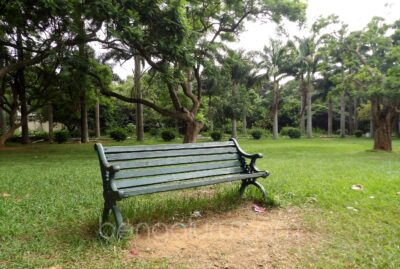 A place to enjoy nature 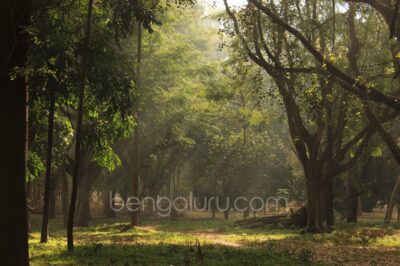 Light and Shade in the park 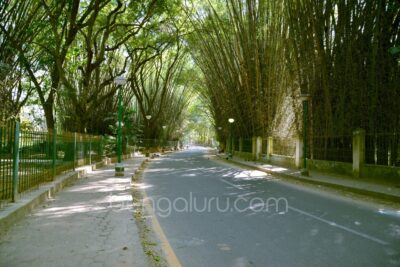 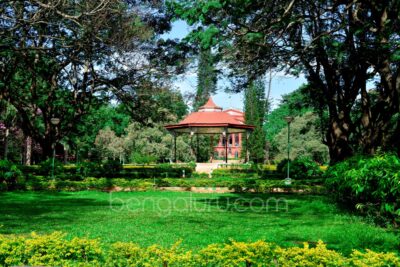 The Band Stand with Attara Kacheri in background 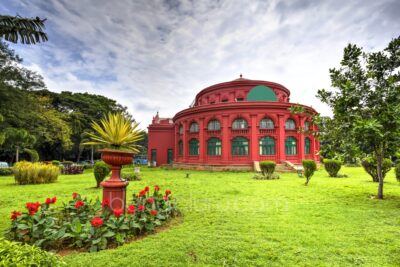 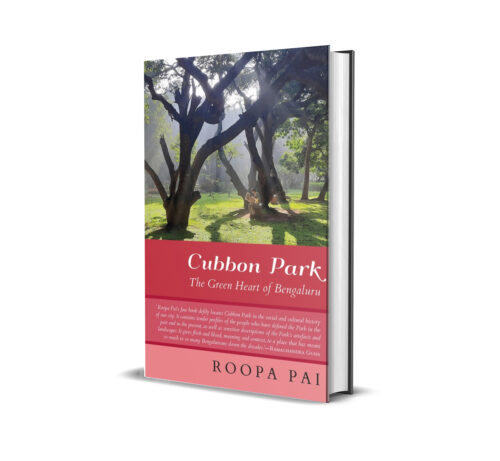 Many generations have traversed through Cubbon Park, which has stood the test of time despite ups and downs. Whether one is a historian or not, Roopa Pai’s new book on Cubbon Park is a welcome addition to the growing library of books on Bengaluru.

The book is not just about the park but also of the people behind its birth, growth and survival.  The first thing a reader will notice is the intriguing section names which are grouped first chronologically and then by various roles of people. In fact, the book can be easily converted into a play script where the park forms the changing backdrop and the key people associated with it would take us through its evolution over time.

As with many other books on Bengaluru, the first section starts with the birth of the city during the time of Kempegowda. The reader is taken through the rule of Hyder Ali, Tipu Sultan and the Wodeyars leading finally to the British era. Even though it is peppered with a lot of historical facts, profiles and  incidents it is easy to read and does not overwhelm the reader. It is light on botanical features of Cubbon Park, but that could be the subject of an entire book by itself. What is also commendable is that the book also brings to light efforts of lesser known people such as Mahantesh Murgod in recent years.

The last part of the book focuses on the activists, the court battles to protect the park and the mixed outcomes of these efforts. Over the years, many groups have tried to assert their power over developments in the park and even poor dogs have been dragged into the imbroglio.

Roopa adds a personal touch writing about her own association with the park and why she chose to write the book. With elements of history, travel, horticulture, autobiography, environment and social issues it is difficult to classify it under any single book genre. However, that should also make it more appealing to a wider audience.

If you believe you have lost touch with the ever-changing Bengaluru over the years or you simply want to know more about our green heritage, this is a must read. 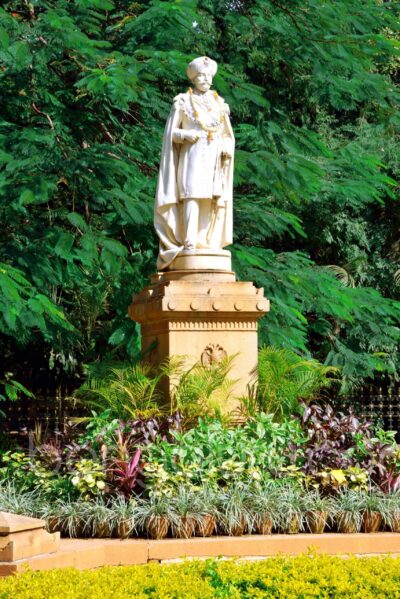 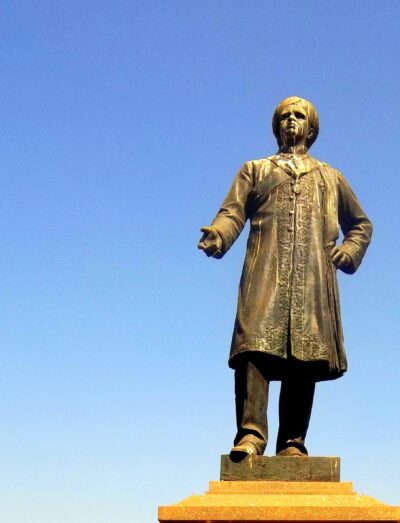 Why did you choose to write a book on Cubbon Park and how long did it take you?

Speaking Tiger Books had been bringing out a series of books on city neighbourhoods. There were already two books on Delhi- Chandni Chowk and Connaught Place – and two on Mumbai – Colaba and Shivaji Park. They approached me with an offer to write a similar one for Bengaluru. I thought of all the neighbourhoods I knew or had lived in. There were many good candidates but in the end there was only one place that seemed ideal for the book. Cubbon Park has always been an inseparable part of my life as well as that of my family and friends. Incidentally, the park was also midway between my parents’ home in Seshadripuram and my in-laws’ home in Indiranagar and hence always on my way from one place to the other! It also occurred to me that there are many good books on Lalbagh but there was nothing dedicated to Cubbon Park. So, I started working on the book in the middle of the second Covid wave in 2021.

What were some of the challenges in writing this book?

The book did not take a long time to write but I had to interview a lot of people and the pandemic made that difficult. There were a lot of restrictions on movement and understandably people were also reluctant to meet in person. I was not keen on online interviews but ended up doing that in a few instances as some older people associated with the park were now living in distant suburbs. I did not want to start writing until I had talked to everyone and got their perspectives. The history was not always clear and sometimes I had to go to multiple sources to put it all together. For example, there are so many conflicting stories about the extent of the park and how it has changed over time.

How did you decide on the format and structure of the book?

Since the book would cover the entire history of the park, my first thought was to divide the book into two major sections, the first 100 years and then the next 50 years. Next,I had to decide how to structure the book and the narrative style. I thought of writing about the statues together as they have been ‘watching’ everything that has happened in the park over time. So, they became “The Watchers” and that gave me the idea to name the other sections in a similar manner.

Cubbon Park is a visual delight. Why not a large format book with more photos?

It was offered to me as part of the city neighbourhood series which already had a prescribed format. Personally, I am a history buff and am fascinated by people who made things happen over time. So, as a writer I prefer to write about them. In my experience, in a book where photographs dominate, the text often becomes secondary and only supports the images. I also avoided writing much about the flora and fauna of Cubbon Park as I was presenting it as a people’s park. While Lalbagh was a planned botanical garden and a nursery for the city, Cubbon Park was never seen in that light.

How did you become a full-time writer after an engineering degree?

I always tell everyone that doing engineering was a detour as I always wanted to be a writer. It was also the unwritten rule of the 1980s South Indian middle class families that one studied either engineering or medicine. My mother was always keen that her children study a professional course to be able to earn a living, no matter what the final career choice was.

How did you develop an interest in history and heritage?

After my marriage, my husband Arun and I lived in London for some time where we discovered the concept of the walking tour. Later while in the USA, we were intrigued by how they celebrated their short history as a country. It then dawned on us that in places like Bengaluru we don’t think much about our history let alone celebrate it. It was also ironic that we know so much about global history whether of the American Revolution or the World Wars but very little about the local history of Bengaluru. Back in India, we considered conducting walking tours in Hampi, but realized that it was too far from Bengaluru where we lived. Then my husband did some more research into Bengaluru history and discovered that it had a very rich history that not many knew about and was therefore a good place to start city walks. About the same time I was into writing for children and decided on leading walks for children that focused on the city’s history and heritage. People and the media loved it and it became a huge success.

What do you want the reader to take away from the book?

First, it is intended for Bengalureans who have been living here for generations. I wanted old Bengalureans to get back that warm feeling about the park and rekindle that spark. It is also for migrants who don’t have childhood connections with the city. It helps them understand how people have cared for the park for over 150 years and that they need to do the same. If everyone cares for it, then the future of the park will be safer.

Roopa Pai is a third-generation Bengalurean who has carried on a love affair with her city for as long as she can remember. She always wanted to be a writer and has over 20 books to her credit, a majority of them for children. Roopa is the co-founder of Bangalore Walks, which has taken thousands of people on walking tours since its inception in 2005.

Roopa lives in Bengaluru with her family, and – horror of horrors – drinks chai instead of coffee, the staple beverage of the city!

The images may not be copied or used without the prior written permission of the copyright holders.