Down the Memory Lane 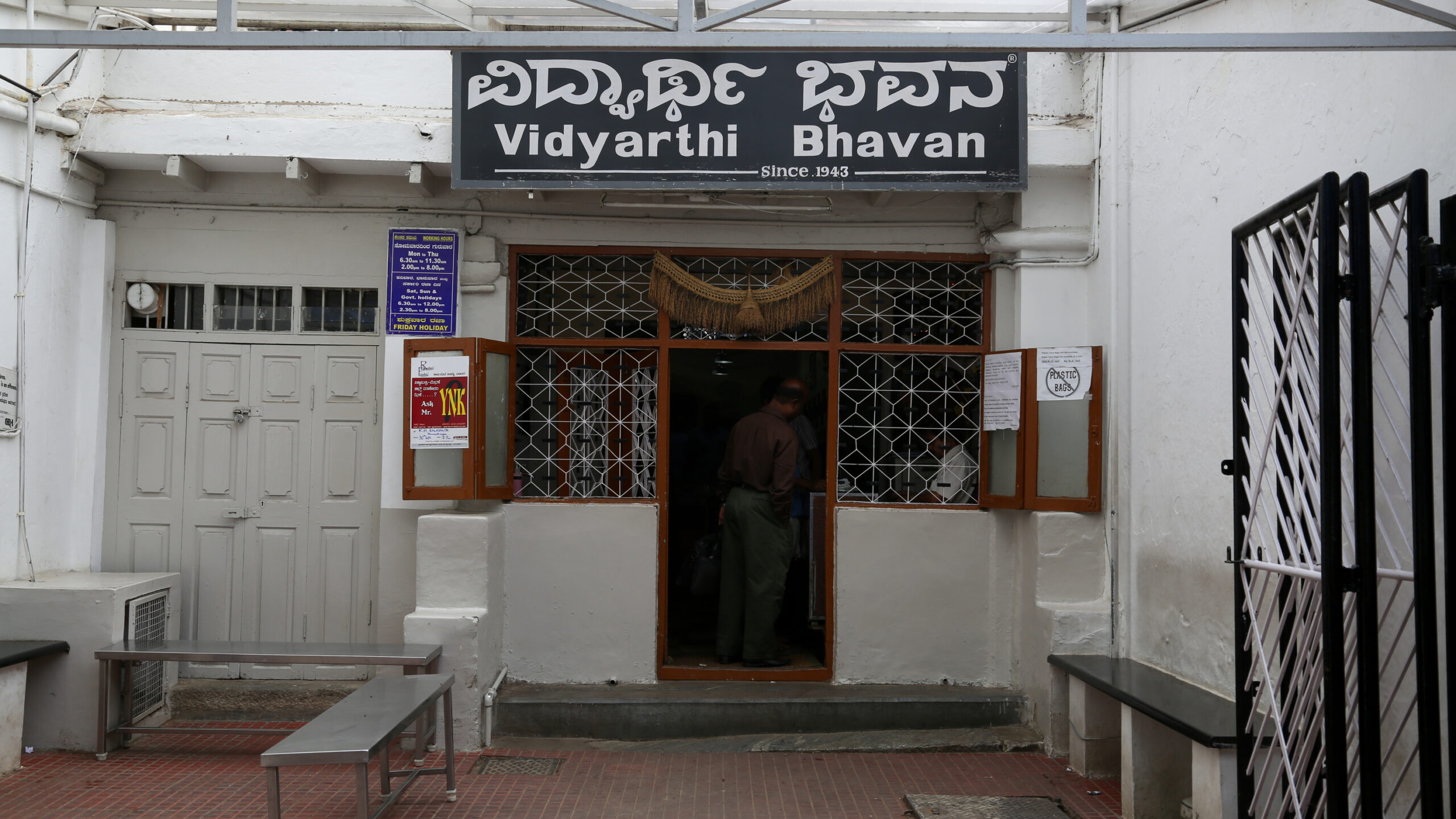 Gandhi Bazaar Main Road in Bengaluru – about 2130 feet in length – starts from Tagore Circle (which is rectangular in shape) and ends at Ramakrishna Ashrama Circle (which is shaped like a stadium or a rectangle with round corners).

Between these misnomers is a street covered by a canopy of rain trees. Thousands of birds fly around above and an equal number of people below are engaged in shopping.  About midway on this road is the now physically non-existent Gandhi Bazaar Circle and just off the ‘circle’ is the home of Vidyarthi Bhavan. Squeezed between shops, hidden by flower and fruit sellers, you can easily miss it in a wink. But it has not escaped the eyes of hordes of hungry customers for generations.  Many hapless customers who are unaware or forget the weekly holiday come on Friday and stare despondently at the closed doors.  In fact, when it is open for business, if one ever sees no crowds blocking the entrance, it should be adequate grounds for a commission of inquiry! In 2018, it celebrated its Platinum Jubilee, looking pretty much like it did when it was started by Venkataramana Ural.

To commemorate the occasion, the management brought out a coffee table book in Kannada and English. The cover of the book has a unique touch to it. It features the signature Masala Dosé with the coconut chutney in a stainless steel plate. The dosé looks perfectly ‘double roasted’ as many customers demand and you can even feel the thick, rough texture when you run your hands on it. Alas, you can only see it and touch it but cannot taste it.

For a restaurant that has become a legend for over seven decades, the story behind its fame and longevity is definitely one that needs to be told. If you have eaten one of the estimated two crore or twenty million masala dosés made since 1943 (as stated in the book), you are a part of this history.

The book starts off promisingly with a profile of the founders and the neighbourhood. From there it becomes merely a reproduction of the Visitor’s Book. More than half the book – about 70 pages – are dedicated to visitor comments or celebrities eating at the restaurant. Most of us who have been there know of the quaint atmosphere, the long wait with expectation, taste and other special features. We all have perked up our ears and locked our eyes on the ‘usher’ who calls the names of those who are next to be let inside. Obviously, anyone featured in the book would have only praises, echoing what many of us feel. So, reading variations of the same comments over and over again becomes déjà vu. Sure, quotes are an important part of the story, but it could have been condensed into fewer pages by carefully selecting interesting ones.

“Standing right there where it started, Vidyarthi Bhavan has very little to change except for its minor upgradation in its interiors and a little extra comfort to ensure convenience to its everyday growing customers.” 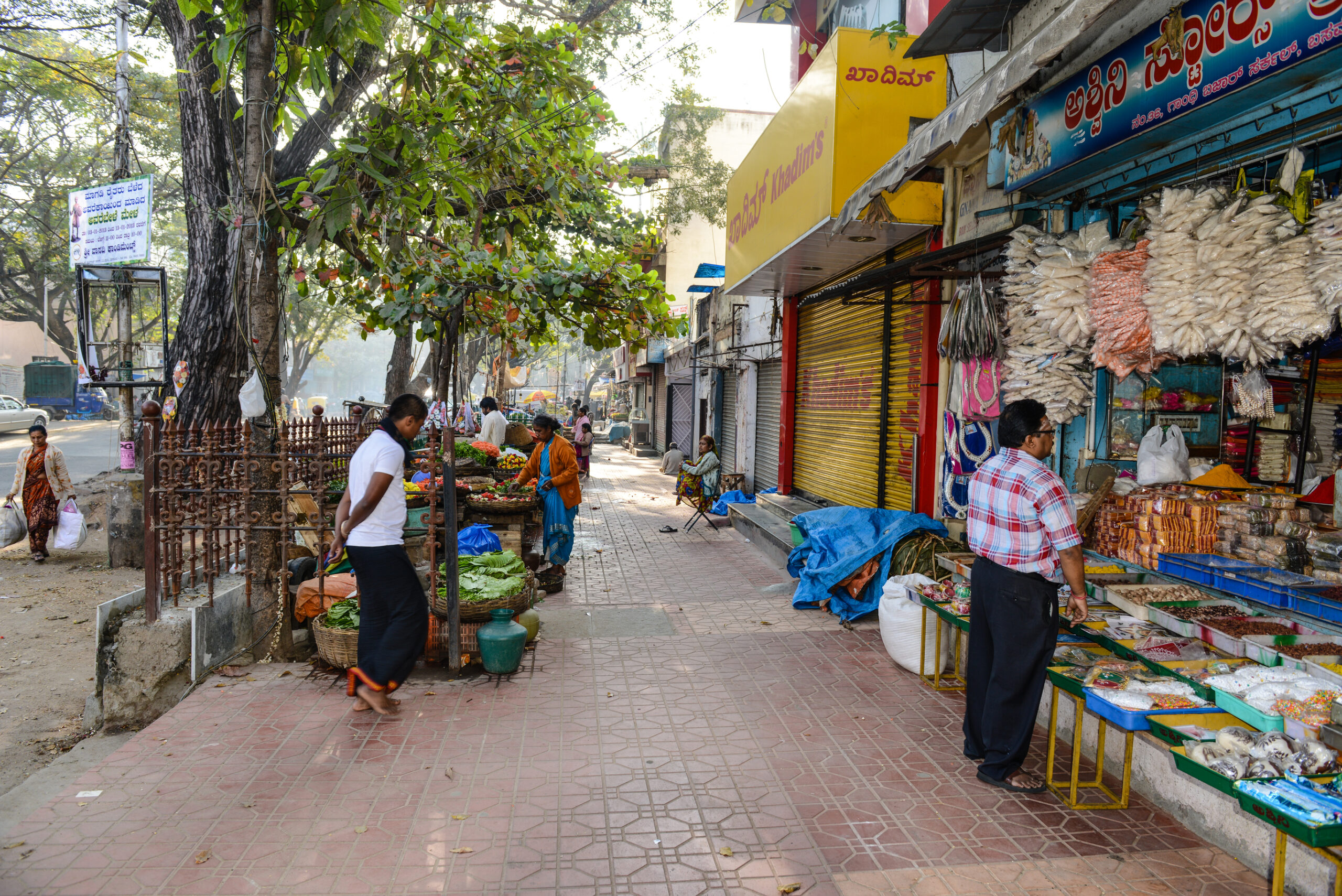 A View of Gandhi Bazaar Main Road
NenapinagaLa – the book 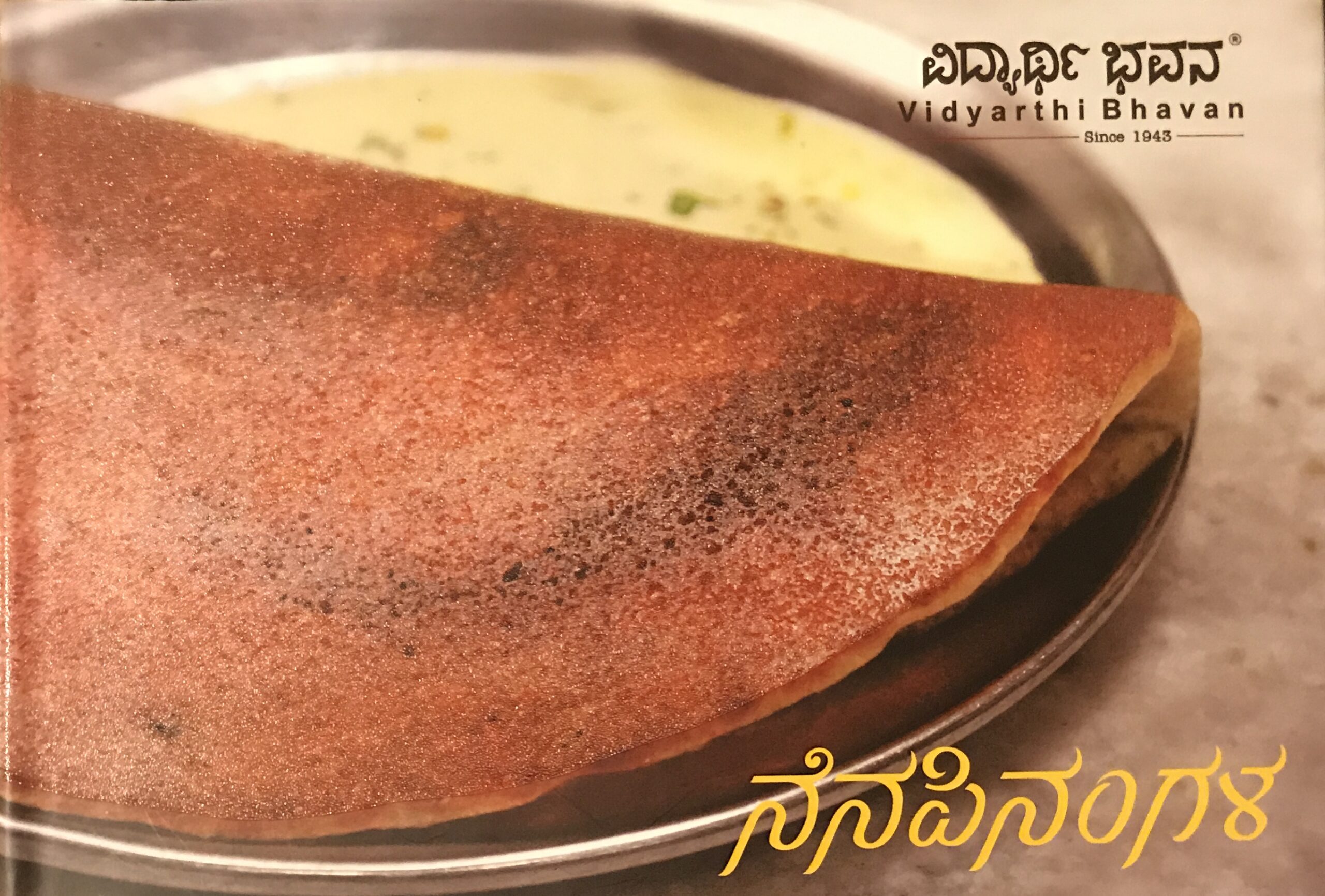 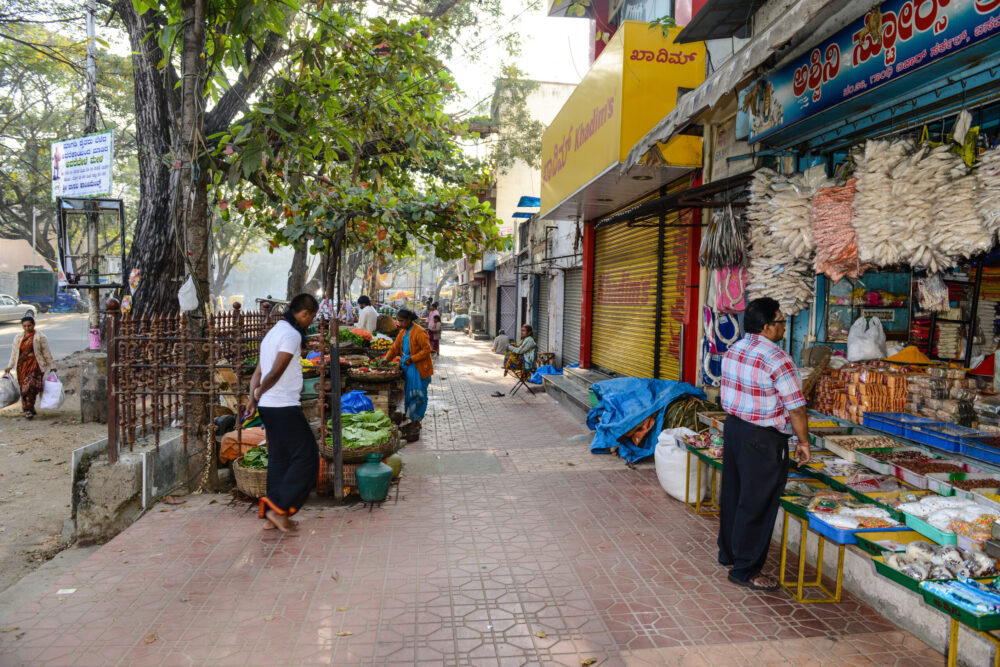 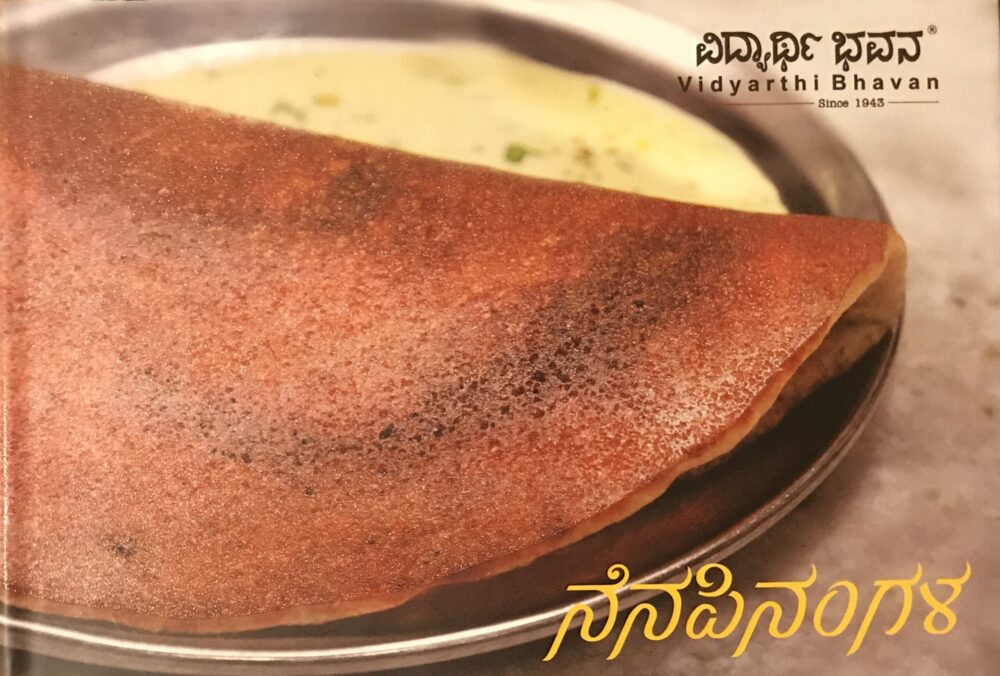 What would have been more interesting to know is the behind the scenes story of how Vidyarthi Bhavan evolved over years.

What changes have happened over 75 years? How does the management plan for a typical day of business? How do the staff behind the curtains run the operations? How does one keep the taste consistent over time (or not)?  Has modernization affected business?  What has happened when one generation of cooks are replaced with the next? What was the price of a masala dosé 50 years ago?  Have customer expectations and preferences changed over the decades? What have been some memorable occasions or Interesting experiences with celebrities (rather than just their comments)?

The book has lists of people from various walks of life who have been there. A lot of those names will probably not ring a bell. There are quotes from many well known and many more unknown people.

A lot of gratitude is expressed to government, bureaucrats and civic authorities. Five Bengaluru ex-mayors between 2010 and 2014 have words of appreciation. Even amidst all the enumeration, the book does carry some interesting anecdotes about Masti Venkatesh Iyengar, the portraits on the walls of the restaurant drawn by an employee named S.V. Murthy, how restaurants in the city were named over the years, the grandfather with walking stick and about measures taken to prevent theft of cups. Wish there was more of it, but that is sadly not the case.

Excellent colour and black&white photographs are scattered through the book. There is a drone photograph that depicts how crowded Basavanagudi has become today with Vidyarthi Bhavan almost devoured by new buildings. There is a picture of the benches in the kitchen where the overflow crowd could sit and eat many years ago. The one with philosopher UG Krishnamurthy and well-known journalist YN Krishnamurthy (known as YNK) is fascinating and makes you wonder what was being earnestly discussed between the two of them. It has intellect stamped all over it!

But at the end of it all, one feels that a golden opportunity to know what made this place the legend it became, is lost. In 2043, which is just 22 years away, Vidyarthi Bhavan will turn 100. The next generation will definitely ensure that. If a book is brought out to commemorate it, let us hope it tells us the real story we would love to read.

While we wait for that, you can eat at least 20 masala dosés at Vidyarthi Bhavan for the price of the book. That would be a better choice. 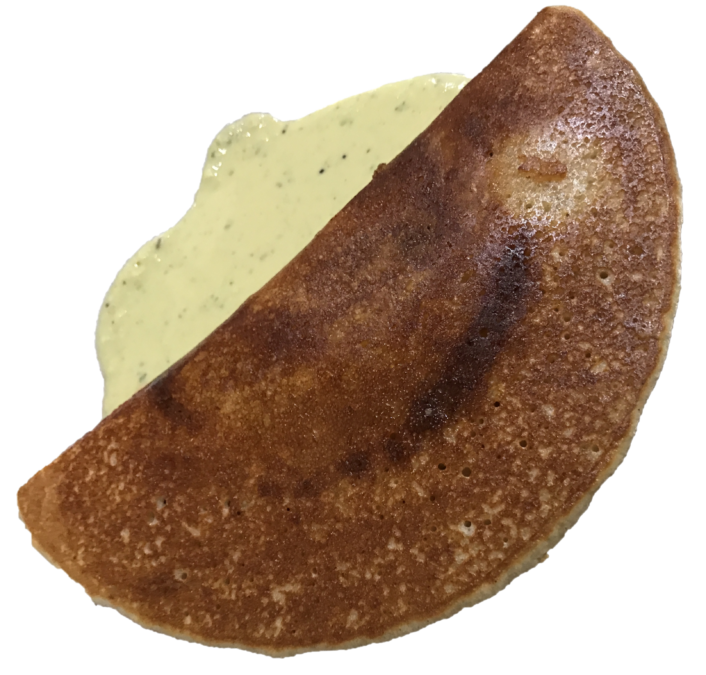 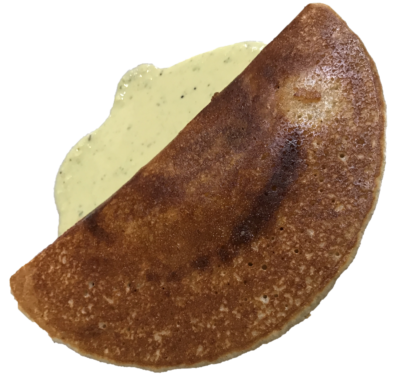