A Walk Back In Time

The best way to explore any city is on foot. Take a virtual walking tour from Seshadripuram to Gandhi Nagar in the heart of Bengaluru to help stoke the memories and bring the past back to life.

The best way to explore any city is on foot. Take a virtual walking tour from Seshadripuram to Gandhi Nagar in the heart of Bengaluru to help stoke the memories and bring the past back to life. 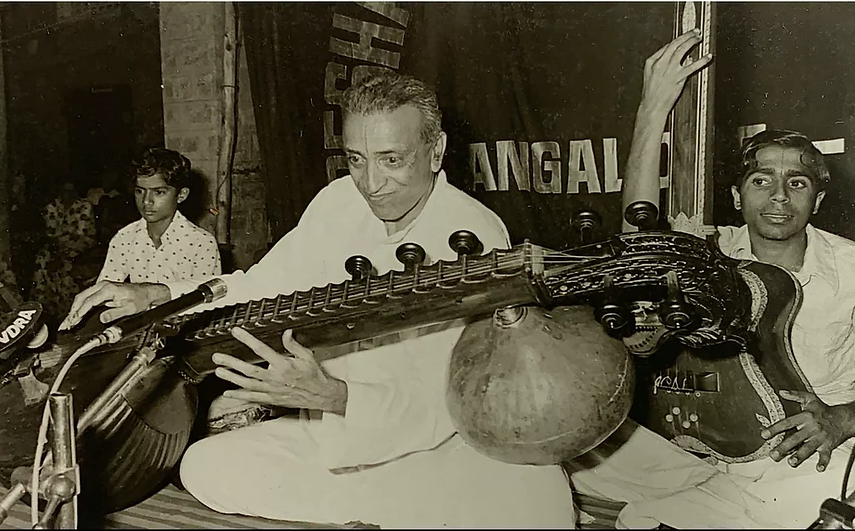 I came to Bengaluru, then called Bangalore in the late 1950s from a small village Lakshmisagara in Srinivaspur Taluk of Kolar District. I stayed with my sister in her marital home on the 1st Main Road, Seshadripuram. It was a big building built at the centre of a site measuring 120 feet X 100 feet. The front portion facing the main road was let out to the famous ‘The Malleswaram Cooperative Society’ which was started in 1911.

I used to walk to Arya Vidyashala High School located in Gandhi Nagar (or Majestic as it was called after the cinema theatre). The high school was started in 1942 and still exists today. The school had excellent teachers like G. N. Joshi, a close associate of D.V. Gundappa or DVG and one of the founder members of Gokhale Institute of Public Affairs (GIPA).

It was a straight road to Majestic as Seshadripuram’s 1st Main road eventually became Subedar Chatram Road passing through “the five lights” circle, perhaps the only one in those days in that part of the city. The Seshadripuram Ratepayers’ Association Library and Reading room was on the western side, with the Meals Kitchen of Modern Café next to it. An open space with a single 10 feet x 12 feet room used as a shop-cum-godown by a plumbing and sanitary ware contractor who had earned a reputation as an honest and trustworthy person. Next to it was a big building with a few rooms on its first floor which later housed Kalyan Café started by G. Narasimhamurthy.

A road running down from Kumara Park West to connect Subedar Chatram Road abetting which on its eastern side stood Swastik cinema theatre. Opposite this was the Swastik Bus Stop for the Bangalore Transport Company or B.T.C buses and at the corner of the road was the jutka (horse cart) stand with six to eight jutkas harnessed and ready to leave. Next to the bus stop stood the Seshadripuram Police Station building.

Then, crossing this road, I stepped onto the footpath abetting the building of Avani Shankar Mutt and attached Shiva Temple. This temple with the peepal (sacred ash) tree on its right hand corner was hidden, having been enclosed by a single storied building with several rooms on the first floor serving as a lodge.

I had occasions to see a pontiff staying in the Avani Mutt building and I was told that he visited this temple and meditated under this peepal tree for hours on end. I had also, often seen, that a priest regularly walked past my sister’s house around 10 o’clock in the morning to go to this temple and perform pooja. There was some vacant space by the side of the temple and I remember that there was a Bilva (bael or wood apple) tree also in a corner. Sometimes during a year there was activity in this temple and I was told it was the month of Karthika (the eighth month of Hindu calendar) and devout people visited the temple to see Rudrabhishekam (worship of Lord Shiva).

As I walked down Seshadripuram Circle on the footpath I stood in front of the gate of a temple with idols of Sri Rama, Lakshmana and Sita. This was a small temple built in stone. I remember that the gopuram was not very tall. The temple was at the centre of a large compound with a wide gate opening onto the 1st Main Road. The compound wall on the right side of the temple abetting the footpath of the road towards the Central Talkies had been knocked down and the space was let out to two shops which vended mainly pooja items like turmeric, kumkum (vermilion powder), incense sticks, camphor, sandal paste rolls, vibhooti (sacred ash used in religious worship) blocks and packets and the like. On the right hand corner also there was a shop which vended mainly groceries. On the left side of the building there were two shops one of which was smaller in dimension and the other was regular in size. In the small shop, a lathe, a turning machine and a sheet pressing machine were fixed. The other was a bicycle shop attending to repair of bicycles, bicycle tyres, tubes and other spare parts.

Inside the compound the left hand side was covered with stone slabs. This mantap was often used to conduct pravachanas (sermons), harikathas (story of Lord Hari) etc. At the back of the temple towards its left was a small outhouse where the priest of the temple lived. I believe that the rental from the shops provided necessary funds just sufficient to provide livelihood to the priest. Flower vendors sat on both sides of the gate.

This temple used to be the hub of activity during Sri Ramanavami celebrations. A pandal (a temporary canopy supported by bamboo poles) used to be erected in front of the temple and every evening there used to be either a harikatha rendering or a pravachana by eminent scholars like the respected Krishna Bhagavatar, Doraiswamy Sastri, Seshagiri Das, Jayatirtha Char, Tarkam Krishna Sastri, to mention a few. In addition there were music concerts every evening by stalwarts like Madurai Mani Iyer, T. Chowdaiah, T.R. Mahalingam. M.S. Subbulakshmi, M.L. Vasanthakumari, A. Subbarao and V. Doreswamy Iyengar. In the beginning it used to be a week-long celebration; later it extended to a fortnight and even a month!

Just after the `Madras Gate’ (for the railway tracks towards Madras, as Chennai was known earlier), I crossed the road that passed in front of the house allotted to the Advocate General and walked by the side of the compound wall at the backside of a red building. This was the location of the Urdu Middle School, besides which was the electric sub-station stone building known as `A’ Station. I would reach Anand Rao Circle, named after Tanjore Anand Rao who served as Dewan of Mysore. 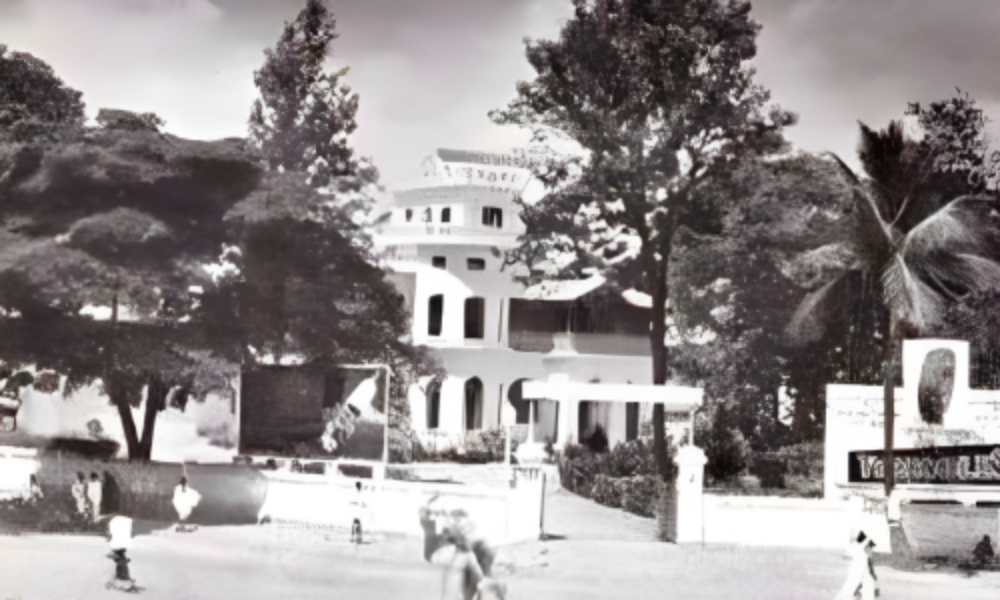 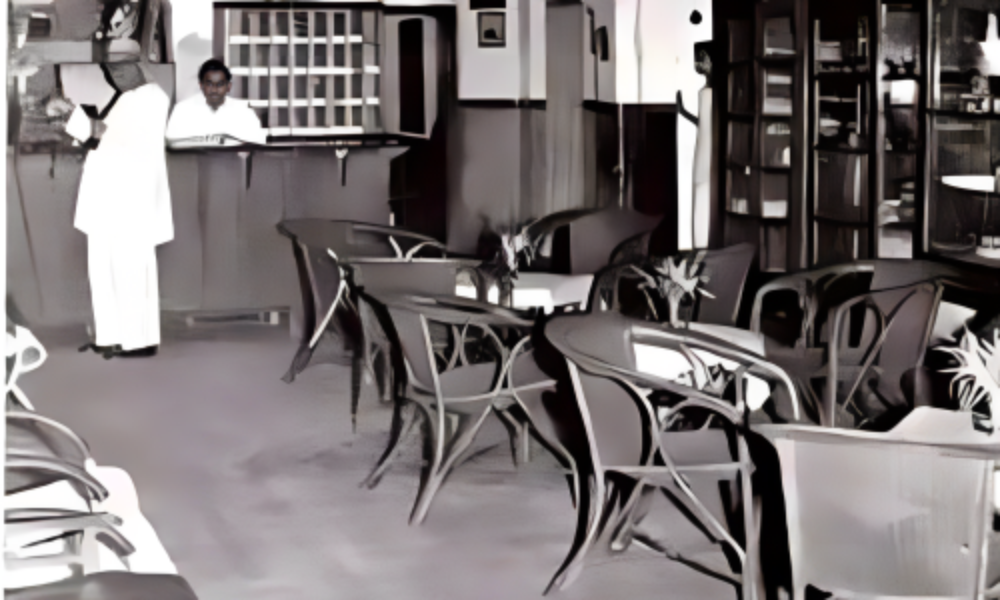 Lounge of The Modern Hindu Hotel

Diagonally opposite the `A’ Station stood an old stone building at the centre of a high walled compound with a large gate. The sign on top of the gate read `The Modern Hindu Hotel’. I had not seen the gates open even once whenever I walked by it. I surmised it was meant for Westerners, mainly British people who frequented Bangalore on some errand or the other and that they did not like the gates kept open. However that was not true. This hotel was started in 1916 with the help of a small subsidy from Sir M. Viswesvaraya and it served the local clientele who came from neighbouring places either to attend the District offices or the Atara Kacheri or the Courts. Many government officials stayed here as well as notable advocates such as Sampige Venkatapataiah for whom it was home away from home. It was owned by K.T. Appanna, a philanthropist and asthika (pious or believer in God). A single room in the 1960s cost just ₹7 per day.

There did not seem to be a restaurant. Perhaps they served dinner for those who stayed overnight. Towards Majestic the place abetting the footpath was empty, shaded by a big badam (almond) tree grown outside the compound wall of that hotel. The compound wall extended up to the botanical garden of the Ayurvedic college run by the Principal Partha Narayan Pandit. Then there was a small restaurant which later became the famous Ramakrishna Lunch Home.

Opposite to `A’ Station on the left side of the circle was a very small temple-like building with a narrow and small wooden door which had never been. opened and so I cannot say if there was any idol installed in it. Just by its side on the footpath lay a one-and-a-half foot sized stone leaning against the mound of earth abetting the high compound wall built around a red storied building which extended up to the small building at the corner of the cross road by the side of the Movieland theatre. There was a small hotel in this building which was open till the second (late night) show in Movieland theatre concluded. Many years later, the owner became our good friend as we frequented the hotel to get by-two coffees served in between our rehearsals at Kalaniketan, a cultural organisation I founded with friends.

After the Movieland theatre was a building which served as the Meals Section of Ramakrishna Lunch Home. Next to it was a big peepal tree and the road that led to Gandhinagar passing by the side of the famous Gubbi Theatre owned by the famous Gubbi Veerannana. On the other side was the famous S. Dhondusa Gold Thread Factory that specialised in the manufacture of gold lace, pure silk, Rayon fabrics and silk sarees. Diagonally opposite this factory towards Majestic stood the famous Sri Annamma Devi Temple. As a school boy I had seen curds offered to the deity as `Abhisheka‘ (ritual washing or anointing) flowing out onto the street. The temple was a low roofed red building at the far end of the vast courtyard paved with whit cobblestones with a very narrow entrance. On both sides of the entrance were a number of small bunk shops vending pooja materials, bangles and threads of various colours. They also sold blouse pieces of all hues and even yellow cotton sarees with zari borders, required for offering to the deity. The frontage remains much the same even today!

A lot has changed over the last few decades since my student days but some traditions have continued. Sri Seshadripuram Ramaseva Samithi  still organises scintillating music concerts and will be celebrating its platinum jubilee or 75th year in 2023. It is the second oldest music event after the Ramanavami concerts held at Fort High School.

Many landmarks I have written about no longer exist. Swastik cinema theatre has been replaced by a commercial building. The bus stop is still called Swastik even without the landmark that gave its name. The “five lights circle” has vanished to accommodate growing traffic. Modern Cafe and Kalyan Cafe have surrendered to modern eateries and closed down. There are only traces of the old Seshadripuram left now amidst all the construction, crowds and chaos. The circle at Anand Rao Circle no longer exists, having made way for a flyover. Many landmarks in Gandhi Nagar have ceased to exist or transfigured beyond recognition.

The new name of the city Bengaluru has been adopted from the past but the past itself has been steadily erased over time.

L Padmanabha Sastry is a resident of Hebbala Kempapura in Bengaluru. He studied in Basappa Intermediate College (later renamed as Sri Jagadguru Renukacharya Science College) and Central College before joining Southern Railways. During his career, he was also deputed to the Wheel and Axle plant and Konkan Railway Corporation at Karwar. Outside of work, he was involved in amateur theatre and a newspaper and magazine contributor.