The Magic of Music

Seattle, Nashville, Los Angeles, Brussels, London and Bengaluru all have something in common to celebrate music.

Bengaluru joined the elite list of cities named above with the launch of Indian Music Experience (IME), India’s first interactive music museum. The aforementioned American and European cities are places of pilgrimage for music devotees who visit the Country Music Hall of Fame, Museum of Pop Culture, Grammy Museum, Musical Instruments Museum and the Royal Academy of Music Museum.

IME is the result of M.R. Jaishankar, CMD of Brigade Group’s vision to create a hub of Indian music in the heart of the city. This is more than just a museum with a few exhibits as you can see, understand, feel and play music as a visitor. Music is around all of us in our daily lives whether it is on the television, in the movies, at home or in our cars. But while we are surrounded by it, we rarely pause to think about its creators, instruments or even technology behind it.

Inspired by a visit to the Museum of Pop Culture  Mr. Jaishankar initiated this project in 2010 as a community venture. In his own words, he summarized it thus –

“We have been in the business of building homes and communities successfully for a few decades now. What we have observed is that for a community to flourish, there is a need to have a holistic approach. The promotion of arts and culture definitely forms a part of this. The IME is our way of preserving the vast musical heritage of our country and helping people know more, through the exhibits and interactive elements that we have here. It is our way of giving back to society, encouraging the next generation of music lovers and documenting music history for future generations”.

The IME trust set up to manage the museum is comprised of eminent personalities like PV Maiya, Nirupama Rao and others. Manasi Prasad and Dr. Suma Sudhindra head the operations as Directors. The advisory board consists of celebrities like SM Krishna, Dr. L Subramaniam and Kiran Mazumdar Shaw.

Located in South Bengaluru, IME provides hours of fascinating education and entertainment to visitors. The museum consists of three floors including a Sound Garden, Exhibit Area, Learning Center, Cafe and Gift Store. There are also performance spaces like an amphitheatre and auditorium.

IME covers a wide range of music genres, artists and instruments and it is best left to the visitor to explore and experience it. The exhibits housed in the 50,000 square feet building touch literally every aspect of Indian music from the early ages to the present. 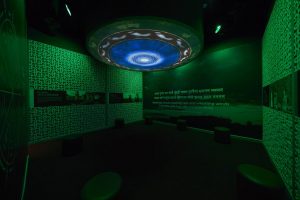 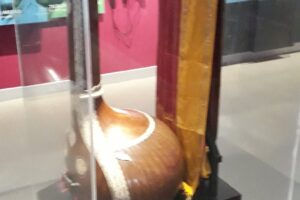 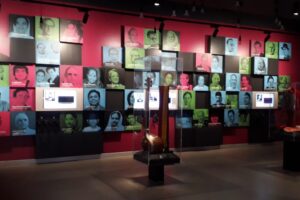 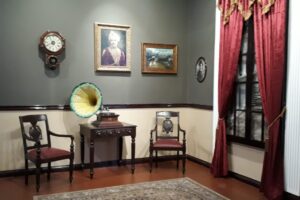 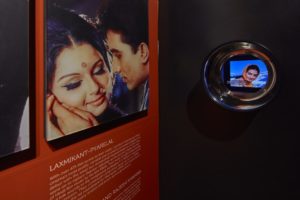 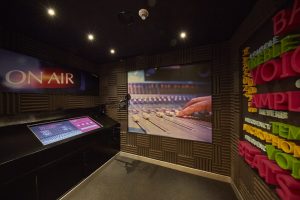 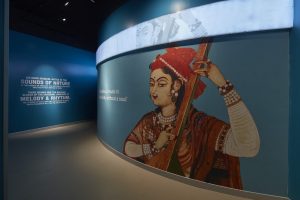 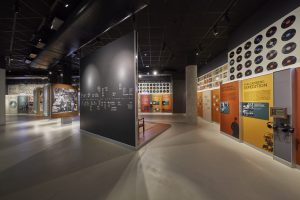 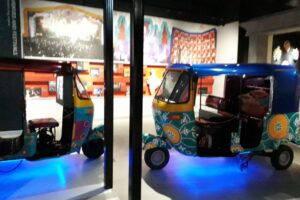 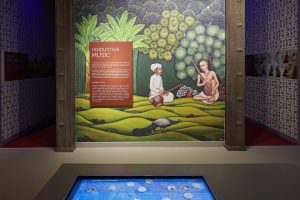 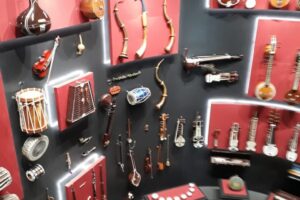 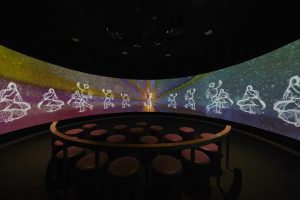 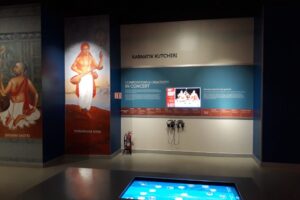 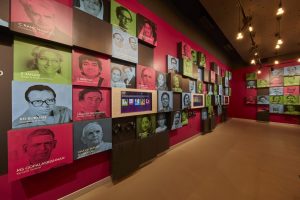 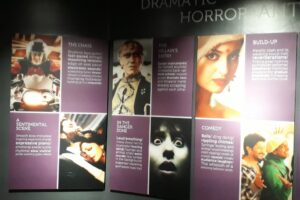 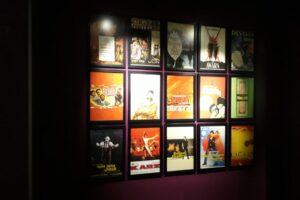 Interestingly, a visitor to the museum starts at the top on Floor 3 and with today’s music. The Contemporary Music gallery covers current favourites like Indie, World, Fusion while  featuring Indian musicians who crossed the musical borders of other countries. The cynosure of this section are the autorickshaws painted in dazzling colours and designs.

Carnatic and Hindustani music traditions are next followed by traditional music like folk and tribal songs. If you are curious to know the history of instruments, Melting Pot gallery will provide you all the answers.

The Instruments Gallery is spread over all three floors with a stunning display of hundreds of musical instruments. Even ardent musicians or music lovers would not have probably come across all of these instruments.

Music’s role in India’s freedom struggle, Indian cinema are the focus of exhibits on the second floor. Also part of this gallery is an interesting film on Kannada film music over the years with a narration by Hamsalekha. The last two sections cover the technology behind the music and the stars who have enthralled us for hundreds of years.

It is also interesting to note the open floor concept where one can seamlessly move from one exhibit to another. Even though music is all about sound, the ‘quiet’ atmosphere of the museum creates the perfect environment for truly experiencing the world of Indian music. We are not just passive listeners in this museum but also creators of our own music. You can take a turn at being an artist – record your own song and listen to it. Or create a mix of instruments of your choice and see the results!

While this is what you experience, what about the people behind the experience? Manasi Prasad, the Museum Director was enthusiastic in explaining the past, present and future. Conceptually, she said that the museum is centered around five verticals – Exhibition, Conservation, Education, Outreach & Audience Development and Music Therapy.

Under Exhibition, she said “We have hosted about 20 to 30 music events just in the past six months with more to come. We also have ‘Up Close and Unplugged’  where award winning contemporary artists are invited.  This is conducted in two parts. The first is a free-wheeling chat where they talk about their collective influences and their process of making music. The second part is the stripped down unplugged intimate music concert. We have had bands like Raghu Dixit, Agam perform under this program. Apart from this we also have baithak style (intimate setting where the artists and audience interact and inspire each other) classical music concerts. ”

Apart from music concerts, IME is also highlighting innovations in the world of music instruments. As Manasi Prasad explained, “We also have the Tradition and Innovation in Music bi-monthly series where we look at innovation in instrument making.  Some time ago we had a young guitarist called Vishnu Ramprasad, who had invented a guitar which was a combination of a sarod and a regular guitar. We also had a Russian inventor called Denis Petrov who invented a portable veena which was more amenable to acoustic amplification.”

One of the major events happening between March and May 2020 is to celebrate the 100th birth anniversary of Pandit Ravi Shankar.

IME has a large number of programs under Education – particularly for children. Some of these like the Storytelling series with Kathalaya draws 4 and 5 year olds into the museum. Manasi explains that “This draws very young children – 4 to 5 year olds – into the museum. Kids this young normally don’t visit museums at these ages but the idea is to get them interested and connect with them.”  IME also has summer camps were top class faculty who interacted with the kids, involve them in different activities and regular group tours for schools.

Music therapy is a clinically proven approach to treat a variety of health concerns. Music can often reduce stress and pain, encourage relaxation, and improve self-esteem.Today, it is a part of the overall medical profession with specialized programs to learn and practice this discipline. IME hosts Sound Healing sessions where vibrations from metal bows, gongs are used along with a guided meditation session. Participants listen to sounds produced by these objects during this music therapy session, which is not only relaxing and rejuvenating but also activates self healing powers of the body.

It has taken many years and phases for IME to take shape as India’s finest music museum. What does the future hold?

IME is also planning to add more interactive exhibits to the museum over time. As part of the Conservation pillar, IME is setting up its Digital Archives. A Music Diploma program is also planned to start in the near future. Manasi noted that “We also want to be inclusive by having tours for visual and physically challenged visitors. Today, we have guided tours for groups of more than 10 people  We are also doing a pilot of an app with a company called FlippAR. They are developing an app where you can scan the QR code next to an exhibit and it plays the corresponding audio. Sustaining the quality is also important. We have used Ipads throughout the museum for video content as those are generally stable hardware platforms with an assured future for some years.”

A lot of thinking, planning and hard work has gone into making IME what it is today. If you love music, you will love IME.

Johann Sebastian Bach once said “I play the notes as they are written, but it is God who makes the music.”

Surrounded by saints, singers, musicians and their collective creativity all around you , you will feel that you are inside the Temple of Music.